My name is Waldemar L. Olszewski. I am a polish lymphologist.

I was born in Piastów/Warsaw, Poland in a family of landowners in Central Poland with father a linguist and banking specialist.

have been working for over 50 years to bring the light into the human lymphatic system.

I discovered fundamental processes in human tissues connected with function of the lymphatic system. My basic discoveries are in detail described in hundreds of my publications. Clinical and research interests comprise vascular surgery, transplantation, physiology and surgery of the lymphatic system and immunology. Main scientific contributions include designing and introducing into clinical practice the surgical lympho-venous shunts (1966), discovery of spontaneous rhythmic lymphatic contractility in humans (1980), proving that bacterial factor is responsible for development of human limb lymphedema (1994), introducing low-dose, long-term penicillin administration for prevention of chronic dermatitis and lymphangitis in Asian countries (1996), detecting the phenomenon of non-specific elimination of cell grafts (1990), preservation of tissues for transplantation in dehydrating sodium chloride (2003).

I received General Certificate of Education in 1948 in Warsaw and started university studies first at Faculty of Law, Warsaw University in 1948 (through 1950) to change for Faculty of Medicine in 1949.

I graduated in 1954, passed Board in Surgery exams in 1962, received degree of PhD in 19962 and D.Science in 1968. Since 1970 I am associate professor at the Dept. of Surgery, Medical Academy and Medical Research Center, Polish Academy of Sciences in Warsaw and since 1978 until now full professor at the same centers including

(since 1997) chairman of Clinical Department of Surgery, Ministry of Internal Affaires/Polish Academy of Science Hospital, Warsaw.

I received postgraduate training and carried out research studies at Hammersmith Hospital, London during the period 1962-63, then at Harvard Medical School in Boston, USA, between 1968 and 1970.

Served as President of:

- President of International Society of Lymphology (1989-91)

Other professional positions include:

- Visiting Professor at Radiumhospitalet, Oslo (since 1976- ) 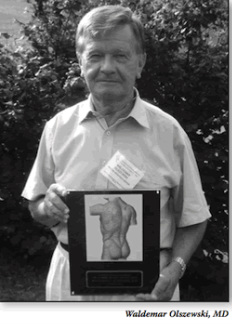 1967 Award for the first kidney transplantation in Poland

1973 International Award of The Society of Lymphology

1975 Award of the International Society of Lymphology (USA)

1997 Award of the Polish Society of Transplantology

2006 Award of the Polish Academy of Sciences

2007 Award of the National Lymphedema Network,

2007 Award of the American Society of Lymphology USA

Olszewski WL. Atlas of the lymphatics of the lower limbs.

Member of editorial boards of many international medical journals among them: